Cache Exploration Inc, a gold-focused firm that holds and operates the Kiyuk Lake Property, has announced the execution of a Letter of Intent (LoI) with the Artemovsky Rudnik Joint Stock Company to acquire ownership of the previously mined Lysogorskoye Gold Deposit in southern Krasnoyarks region, Russia.

Cache said it is preparing to conduct the necessary due diligence on the project.

Either party may terminate the Letter of Intent within 10 business days following the completion of its due diligence.

Jack Bal, CEO of Cache Exploration Inc. States “We are extremely excited to commence due diligence on the Lysogorskoye Gold Deposit. Cache Exploration has been looking for production opportunities around the world to add shareholder value. We feel Lysogorskoye gives us the ability to become a producer in the near term”.

All technical data on the Lysogorskoye Gold Deposit has been supplied by the vendor and has not been independently verified by a qualified person.

The Lysogorskoye Gold Deposit, located in the Kuragino district of Krasnoyarsk, comprises a formerly operated underground gold mine within a 5.34 km2 license area located 2.5 km west of the Abakan- Taishet rail network, with access to the area power transmission grid, good roads, and a local population of skilled people.

The Vendor has held the license since August, 2017. The project may present an opportunity for rapid recommissioning for the production gold dore. – BusinessNewsCanada.com 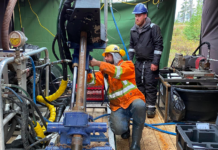